An Aberdeenshire Hill for a festive Bang :)

A quick leg stretch after Christmas

Having not been able to get out on boxing day - I was itching to get out. Weather forecast was not too bad but not too good either!! My brother was up in Aberdeen s we needed something relatively equidistant! So I decidedon Morvern, it was about as far east as you can get a hill (weather was better further east) and it was sort of inbetween our two locations. I got up early and it was snowing when I left - not lying though.  was concerned as I had to drive up past Glenshee. My concerns were realised and the road was ice and snowy from TE sPITTAL. However met Ross at Dinnet and we were soon paked up and on the hill. A nice walk and not too strenuous for this time of year. This was last walk of 2012...... It has been a good year in most respects - see my round u reviews in the vieo section ....

A Memorable morning in the Cairngorms....

Beinn Fhada and A’ Ghlas-Bheinn


Having cracked my radial head (elbow) a few weeks ago – I was
itching to get out and about again. I had not done any exercise since that trip
and was a little apprehensive about not being knackered at the end of this
trip!!! No heavy lifting for 6 weeks they said – but nothing was mentioned
about walking J ha-ha

I have around 20 Munros left to do and all of those are in far
flung places which are too far away for a day trip. So the plan was to drive up
to Morvich the night before and it was decided that we would use the cars
instead of tents. I have done this a few times before and I must admit I
personally find it more comfy than the tent option (plus the fact that I had a
duvet, pillow, sleeping back numerous mats – simply
luxurious!!).

Left home around 20.00 on the Saturday night and
the plan was to meet up at the commando   memorial at 22.00. It went
to plan and we found ourselves at Morvich for around 23.15. Perfect – no
sunlight in October after 19.30 – so we parked up and got our kit ready and off
to bed. Slept ok – woke a few times with a sore arm but apart from that it was
pretty comfy!!


Woke at 05.15 and had the brew on by half past. A coffee and some
Weetabix got me set up and before long we were off along Gleann Choinneachan. It
was pitch black – not even a hint of sunrise so we were reliant on the head
torches. As we headed towards Bealach an Sgairne – light started to filter
through the eastern sky. I had been hoping that we would get a nice sunrise and
was hoping reach the bealach for this. Initially I thought the sunrise was not
going to be impressive, however on reaching the Bealach, I was met by probably
the best sunrise I have ever witnessed. It certainly made up for the last
sunrise I witnessed (which caused my broken arm!!!). On that topic – my arm was
doing well, it was not too sore and the only time I had pain was when I pushed
it out to balance after a slip - that was
sore!!!!!

Anyway after 10mins at the Bealach we headed
north and summited A’Ghlas Bheinn. A few false summits and a ridge which  seemed to go on forever, however we
topped out at about 09.15. An interesting hill but with a nice path all the way
up.

The same cannot be said for Meall a Bealaich!! A grubby, wet ,
manky hill side with only hints of a path. The wet moss and grass and steepness
made slipping a real possibility and with my bust arm, this made this ascent
unpleasant!! I made sure that I had my good arm nearest the hillside as much as
possible. Anyway eventually reached the saddle on Beinn Fhada’s north ridge and
from here it was a slog to the summit. Arm was hurting a little now and my legs
were a little tired now but the views were sill fantastic. Carn Eighe and Mam
Sodhail had a good covering of snow but there was just
sprinkle on Bheinn Fhada. It was now near noon and we had to head back to
the car. We met a few people on our descent and eventually got back to the car
around 14.30. A fantastic trip and a sunrise to make up for the evil sunrise in
Atholl.!! Plus the benefit of know that I can get back walking (still cannot get
on a bike thoughL).  A few ibuprofen
and solpadol sorted that out!! Hopefully will get out again
soon…..

Prologue:
“Am Fear Liath Mòr; also known as The Big Grey Man of Ben MacDhui or simply
The Greyman) is the name of a presence or creature which is said to haunt
the summit and passes of Ben Macdui, the highest peak of the Cairngorms and the
second highest peak in Scotland. It has been described as an extremely tall
figure covered with short hair, or as an unseen presence that causes uneasy
feelings in people who climb the mountain. Evidence of the existence of this
creature is limited to various sightings and a few photographs of unusual
footprints.”- Wikipedia


"I was returning from the cairn on the summit in a mist when I began
to think I heard something else than merely the noise of my own footsteps. Every
few steps I took I heard a crunch, then another crunch as if someone was walking
after me but taking steps three or four times the length of my own. I said to
myself 'this is all nonsense'. I listened and heard it again but could see
nothing in the mist . As I walked on and the eerie crunch, crunch sounded behind
me I was seized with terror and took to my heels, staggering blindly among the
boulders for four or five miles nearly down to Rothiemurchus Forest. Whatever
you make of it I do not know, but there is something very queer about the top of
Ben MacDhui and will not go back there again by myself I know."


Initially we had talked about trying Ledge Route
on the Ben, however my arm had still not healed 100% so we decided on the Grey
Corries……. but a look at the forecast mid week led us to move further east and
the Cairngorms. My friend had yet to go up Derry Cairngorm so we planned an
attack from the Northern Corries, up and over Macdui to Derry
Cairngorm.

Another early start saw us on the A9 before 7 and
we arrived at the ski car park for 08.30. Things were looking promising on the
route up with starry skies giving way to clear blue skies. Heading into Coire
an-t Sneachda and this was still the case, looked like it was going to be an
awesome day!


With thoughts more on Derry Cairngorm
than Macdui at this point and with the sun splitting the sky, little thought was
given to darker things and the Am Fear Liath Mòr……


My previous two trips up Macdui
were contrasting – one on a fine November day in 2002 with a couple of friends
and the other on a fine day from Derry lodge where I had camped for a number of nights. I must admit when I
ventured up Macdi on my own I did feel a little unsettled wondering if the Big
Grey Man would make an appearance, however a sunny warm July day offset these
thoughts……. The sunshine today was having a similar effect as we headed toward
the Goat Track.

We stopped and enviously watched
some climbers tackle some of the mixed routes. The Goat track was also getting
icy so we stopped and put the crampons on. It was at this point that I started
to see the “table cloth” effect. The skies were blue overhead but the eye was
drawn to the lip of the Corrie towards the plateux. Whisps of cloud were falling
over the edge and streaming in the upper part of the Corrie before evaporating.
As we took a direct route up near the Goat Track we were greeted on the plateux
by a spectacular sight with patches of mist floating eerily around the plateux.
Perfect conditions for the Grey man…….

I still had hopes of a fine
outing over the plateux to Macdui and beyond, however the closer we got the
Britain’s second highest peak, the darker things became and soon all signs of
the sun were gone. Macdui was caped in a thick mist. Initially, I was optimistic
that its summit may be poking through the cloud to give a spectacular inversion,
however as we reached the summit that hope had disappeared along with any chance
of a view!! The clag was well and truly in and our mood lowered. The fact that
our water had frozen did not help and it was decided the Derry Cairngorm would
be part of a summer adventure in 2013!!


Figures appeared and disappeared
out of the mist, but these were figures of the worldy kind and like minded
hikers like us heading for the top.

All
was not lost however and as we returned to the top of the Northern Corries the
mist broke again and some fantastic views were given away of the Fiacaill Ridge.
We decided to walk around Corries Edge and descend via Choir Chais…. The views
back were fantastic if not a little spooky –somewhere in the table cloth mist
was the Grey man! Conditions had been perfect for him today but he did not make
an appearance – or…. did he………- see for yourselves the end footage on the video
– spooky………………….. 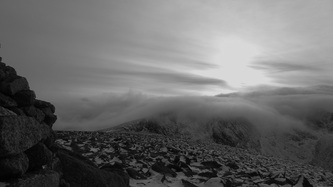 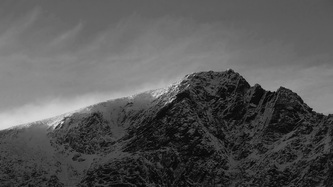 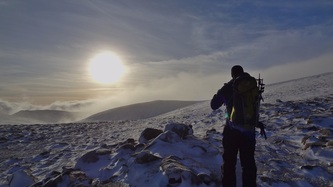 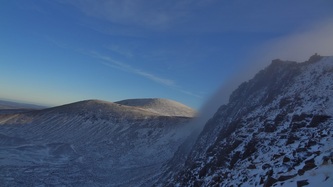 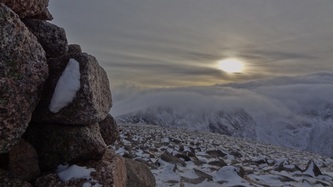 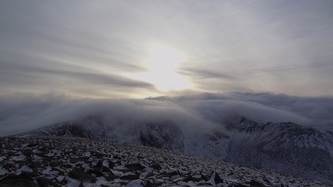 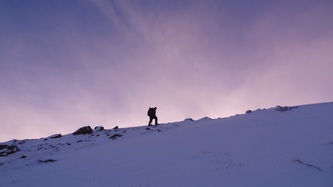